I recently spent 16 days a half a world away. I had the wonderful opportunity to explore Zimbabwe and South Africa on a cultural immersion trip with a group of graduate students.

During our time there, we visited universities, non-governmental organizations, orphanages, were graced with the presence of baboons in the secluded Zimbabwean mountains of Nyanga, climbed the ancient rocks of the Great Zimbabwe – the structure from which the country gets its name, drove across the entire country of Zimbabwe in a very small van, stood in awe at the Victoria Falls, took in the beauty of the Zambezi river – including hippos and crocodiles, enjoyed the Waterfront in Cape Town, walked the halls of the prison on Robben Island, toured the Apartheid museum and Nelson Mandela’s home, and received overwhelming hospitality everywhere we went.

Hippos on the Zambezi River

There is something magical about travel – since I was 14 I have been enthralled with the vastness, and yet, the proximity of all seven continents, the cultures, the landscapes, the dialects, the traditions, the hardships, the joys, the differences, and the similarities. Africa was no exception.

Africa is the 5th continent I’ve been to (yes, I will one day visit all of them), and the sheer size and complexity of the continent leaves a great desire to learn more about this incredible place.

Although we had many amazing experiences, we also witnessed the struggles that the countries are facing. Zimbabwe’s infrastructure is minimal to say the least, which is part of the reason for its drastic unemployment rates -upward of 95 percent in some areas. South Africa is better off, yet still feels the aftershocks of apartheid and racial tensions. Its economy has been in a downward spiral and seems to be continuing. In the week we were in Johannesburg alone, the rand – the currency of South Africa – went from just under 14 to 1 (to the dollar) to almost 16 to 1 due to political decisions and unrest.

We toured townships in each country, more familiar to some as shanty towns, where those on the lowest end of the socioeconomic totem live. There is no running water. Education is poor. HIV rates are high. However, the sense of community is abundant and obvious. That still doesn’t quell the feelings of injustice and helplessness at the inequities, not only there, but also brings forward the parallels and contrasts of the U.S. We have poverty and socioeconomic disparities here, but we are adept at hiding our poor, hungry, and homeless, and so it is not as present. 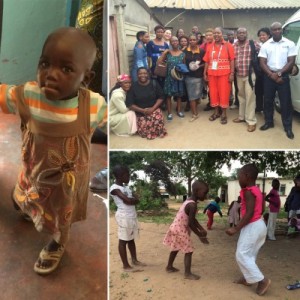 Far Left and Bottom: photos from the Matthew Rusike Childrens Home; Upper Right: photo from LESO – Life Empowerment Support Organization – which works to educate, assist, and provide resources about HIV and AIDS in the community.

Everywhere we went, though, we were welcomed. Food was shared. Conversation was had. Laughter was abundant.

There is a term I learned while in South Africa: Ubuntu. I am because you are.

“A person is a person through other people: strikes an affirmation of one’s humanity through recognition of an ‘other’ in his or her uniqueness and difference. It is a demand for a creative intersubjective formation in which the ‘other’ becomes a mirror (but only a mirror) for my subjectivity. This idealism suggests to us that humanity is not embedded in my person solely as an individual; my humanity is co-substantively bestowed upon the other and me. Humanity is a quality we owe each other. We create each other and need to sustain this otherness creation. And if we belong to each other, we participate in our creations: we are because you are, and since you are therefore I am.”*

With the struggles of the world today, and the differences over which arguments are born and bred leading to an “us vs. them” paradigm, it all becomes much more personal through the lens of Ubuntu. It is a collective humanity with shared experiences. There is a wonderful story that we were told about a young woman who has come to be known as the “Ubuntu Girl” – watch it here. 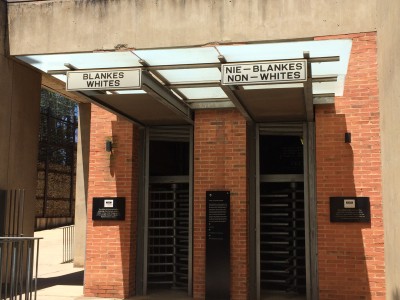 As we head into a new year full of new opportunities, I wonder how we can incorporate the notion of Ubuntu into our daily lives; how to live more in to this idea of human connectedness.

This was an incredible experience in so many ways – emotionally, physically, and intellectually. I strongly believe that every time you travel, you leave a piece of yourself wherever you go. But in doing so, you gain so much more: insight, perspective, compassion, knowledge. It is a never-ending process, and one that I hope to continue for a long time to come.